Long Ago, In a Chicken Hatchery Far Away... 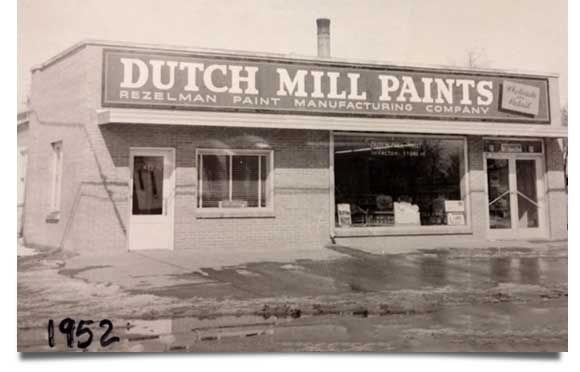 RepcoLite Paints began over 70 years ago in the basement of a chicken hatchery on the corner of 32nd St. and Columbia Avenue in Holland, Michigan.  It was at this location in the late 1930's that a gentleman by the name of Jake Rezelman started a small business he called the Rezelman Paint Manufacturing Company.

Over the next few years, Rezelman worked out of that location, producing his own brand of paint (Dutch Mill Paints) using old machinery and limited ingredients. Eventually, by the mid 1940's, the brand had become popular enough and business had improved to the point where Rezelman found he was unable to meet demand working on his own:  he needed a partner.

Around this time, Ben Altena was running a Barber Shop in Washington Square in Holland. Being the shop's owner, he found himself "stuck" in one spot cutting hair all day long. According to Dave Altena, Ben's son, he just "got tired of standing in one place all the time." So, when the opportunity arose in 1946, he left the barber business and joined Rezelman.

From that point on, they poured their energy into making and selling their paint. During the days, they would produce paint at a rate of about 25-50 gallons a day. However, while the work of hauling all the bags of raw materials down into the chicken hatchery basement and then carrying all the finished paint back out was a job in and of itself, it was only half the work required.  Once the official work day ended, and the machinery was cleaned and made ready for the next day, they'd begin the second part of the job:  selling the paint.

Some of the paint was sold during the day out of a small store they had set up in the basement, but the bulk of their product was loaded into a truck and sold and 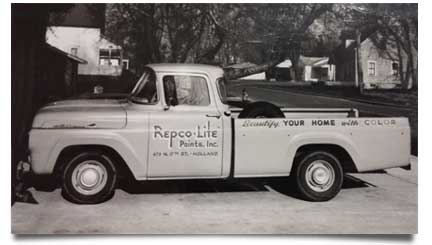 delivered to painters throughout the area. Operating on the same basis as the milk man, Ben drove a regular route every night, stopping at the homes of local painters. The painters would place their orders and purchase the paint they would need for the upcoming day. At this point in time, paint colors weren't an issue because all the painters of that day tinted their paint on the job site.

Business continued in this manner until sometime in the early 1950s when Jake Rezelman and his wife were forced to move to Arizona for health reasons. At that point, Ben Altena purchased the company and moved it to its current location on the corner of West 17th Street and Homestead Avenue on the West side of Holland. The building he moved into had originally been a gas station and then, later, a beer storage facility. With the gas pumps and the beer barrels out, Ben moved in with his machinery and resumed production in a much more suitable location.

Soon after, Don Plasman and Fred VerSchure joined the company and all three worked together to roll gallon after gallon of Dutch Mills Paint out of the store. That is, until a somewhat larger and better known paint company going by the name of Dutch Boy Paints, claimed that Ben was infringing on its trade name. The infringement claim sent him to the drawing board: he needed a new brand name for his paints. After giving it some thought, he settled on "RepcoLite Paints".

At RepcoLite, we've been asked many times what the name actually means.  There are a lot of guesses out there, some better (and more interesting) than others! However, the meaning behind the name is simply this:  Altena came up with the name by merely shortening the company's original name:  REzelman Paint COmpany.  That gave him the "REPCO" part of the name.  The "LITE" was tacked onto the end of the new word simply because it was a popular word being used at the time to convey the idea of something "high tech" or "cutting edge".

A few years later, the "Rezelman Paint Manufacturing Company" name was dropped and RepcoLite became the name for both the business and the brand.

From that point in time, many years have passed and we've watched the business grow dramatically.  Retail stores were added and before long, the single factory store was joined by 4 other RepcoLite locations throughout Holland and Grand Rapids.

Around 2007, RepcoLite purchased Snyder Paints in Goshen, Indiana and Port City Paints--a paint manufacturing business out of Muskegon, Michigan. Around this same time, we added Benjamin Moore Paints to our lineup of products.  With these new locations giving us 7 locations from Muskegon, Michigan all the way down to Goshen, Indiana and the addition of Benjamin Moore Paints, RepcoLite employs over 50 employees and produces nearly 300,000 gallons of RepcoLite Paint annually!

And that's the basic history in a nutshell. We're proud of our history and of the effort involved in creating this company. The success didn't just happen:  it took a lot of work and commitment. The founders of the company realized that in order to create a successful business, they needed to provide a high quality product at a fair price. They also realized the importance of providing better-than-expected customer service. Those ideals are still the recipe for our success all these years later. We're proud to be continuing the work that Rezelman, Altena, Plasman, and Ver Schure started all those years ago!