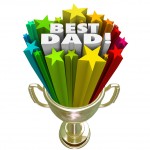 But the problems come about when they actually believe what I’m saying. See, when I say all those things . . . the sad little truth is that I’m lying. Oh, I say I don’t want presents, but what I’m REALLY saying is that I don’t want any CRUDDY presents. I want fun stuff. Video Games and electronics of all sorts. Things like that. Things that are wrapped in plastic and have anti-theft devices inside. Things with bubblewrap. Yes, I’m trying to sound big and adult and above the notion or need for presents, but inside, I really, really just want GOOD presents.

Well, unfortunately, my family doesn’t always clue in to this fact. No. They take me at my word and they don’t get me anything . . . and so when father’s day comes around and I wake up and don’t get anything . . . I usually get all pouty and I mope around the house until Tami says something along the lines of “Fine . . . I’ll go buy you your stupid present tomorrow!”

Well, when that happens half the fun is gone. And so I say that. I say, in my most adult and serious and honest voice, “No, no, no. I’m fine. I’m just being a crab. Besides, if you’d get me something now, half the fun would be gone because I complained so much. So really, don’t bother. I’m fine. Fine.”

Now, what she hears when I say something like that is this: She hears me say “I’m sorry for crabbing. I love the handmade cards I got and don’t need anything else. In fact, I don’t deserve a present and the fun would be gone anyway because of how I acted. So Don’t bother.”

That’s what my wife hears. And this is a lesson for all men and women out there about how differently we communicate. See, that’s what she hears, but if you remember what I said, you’ll realize how wrong she would be in interpreting it that way. See, what I actually said was, and I quote, “if you get me something now, half the fun would be gone” end quote. Now, do you see the difference?
She thinks I said “the fun would be gone” when in reality, I said, only HALF the fun would be gone. Now, maybe for you women listening, that makes no difference–maybe those two things mean the same things to you–but to a guy, there’s a world of difference. Let me explain: see, to a guy, what that means is that while half the fun would be gone . . . the other half of the fun would still be there… And half is better than none, right? I’d rather have half a dollar than no dollar. I’d rather have half a roast beef sandwich from Arby’s than no Roast beef sandwich. It’s not complicated. Half is always better than none.

See, the whole thing is code. It’s my way of saying, OK, go buy me something tomorrow–I know I was a jerk and I know that because of that I’ll feel bad about getting something. And I know that bad feeling I have will take away 50% of the fun I would have had. But I’m willing to sacrifice that 50% of fun in order to pick up the other 50% of fun the present will bring.

Really, the whole thing is very simple, when you break it down . . . but Tami just doesn’t get it and so that’s what happens on most Father’s Days. Oh, like I said, it’s my own fault. I know that. I know I’m being petty and childish and ridiculous. I know all that.

But that’s not the point. The point I wanted to make today is that this year looks like it’s going to be different. Oh, of course, I did the same thing I do every year. I made all the standard brush-offs when it came to presents. “Don’t get me anything–let’s just save our money” and other tripe like that. But this year, when I said those things I watched as as everybody looked at each other and winked and nodded. And that’s when I realized that they KNEW! They knew I was only saying that to sound like an adult. They knew I wanted presents!

I remember sitting at the table that night and almost rubbing my hands together: I was going to get presents this year.

But . . . . Yes, there’s a but. A big one. See, I thought this year would be different, BUT, a few days later we went to Target for some basic things and as I was walking through the store ahead of my wife and kids, I happened to turn around to ask them something and they all straightened up and acted like they weren’t doing anything. But I had seen them. Oh, I didn’t let on . . . but I started sweating . . . because I had seen them. I knew what they were doing: They were getting me my Father’s Day present.

Now, you’d think I’d be happy about this, but I have already told you: I’m a petty and small individual. And they weren’t standing by the electronics when I caught them. They weren’t standing by the Video Games. They were standing at some end cap display that was full of . . . are you ready . . . trophies. Yes. Trophies. They weren’t even metal trophies. They were that resin stuff and then painted to look kind of gold. They were trophies with a golf ball and some grass by it and the trophy said “Number 1 Dad.” They were $9.95 + tax and Caleb, as I stared at him, currently had one behind his back and was trying to pass it to Tami so she could slip it into the cart without me seeing it.

Well, I let that go. I don’t know if they bought it or not. I think it found it’s way back to the shelf, but I won’t know for sure until Father’s Day.

As the days went by, I forgot about it. It’s not a big deal–it’s just Father’s Day–and I went about my normal life. Until Caleb asked me if I had any scrap hunks of wood he could nail together. Well, I do . . . but I was curious what he was going to build. Oh, he was a little embarrassed and nervous to tell me but then he confided that he was going to build me something. With wood scraps and roofing nails. For Father’s Day.
Well, you can’t argue with a little boy building his dad a present out of wood scraps and roofing nails–oh, you can wish it was an ipod, but you can’t fault the little guy for trying–so I pointed him in the direction of the wood heap and told him not to poke his eyes out.

He hammered away for a while and then emerged with something that he decided was for him instead of me . . . and again, life went on. Time passed and I forgot about Father’s Day and presents and trophies and wood scraps . . . until the other night.

See, Tami and the kids were running a garage sale with my sister and they were all there the other day. As we were sitting around the table that night, eating dinner, Caleb and the kids confessed that they had spent much of their time at the garage sale . . . shopping. Caleb took a bite of his hamburger and put it down and said,

“Dad, I looked and looked, but didn’t find anything for you.”

I looked at the boy and thought he was joking. He didn’t seem to be. So I asked a clarifying question: “You looked for things for me at our own garage sale?” He nodded.

I looked at him a little longer and then asked another clarifying question: “You know what a garage sale is, right? You know that’s a place where people bring the junk they don’t want, put $.25 on it and hope somebody takes it, right?” He nodded.

“And you didn’t find anything for me?”

He shook his head. Well, I breathed a sigh of relief–last thing I wanted for Father’s day was an old 70’s lamp I was trying to get rid of. “Oh, don’t worry about it,” I said, “I don’t need anything anyway.”

Well, as I said in the beginning, we’re closing in on Father’s Day . . . and I have no idea if I’m getting anything or what I could be getting. But I’ve changed my mind on whether it’s important or not. It’s been fun watching their little minds work as they try to find something they can afford that they could give me. And 10 years from now, I’d rather have that #1 Dad trophy or that hunk of wood with nails on it sitting on my shelf than a hundred ipods. But you know, guys, in case your listening . . . I wouldn’t mind both . . . .

This website uses cookies to improve your experience while you navigate through the website. Out of these, the cookies that are categorized as necessary are stored on your browser as they are essential for the working of basic functionalities of the website. We also use third-party cookies that help us analyze and understand how you use this website. These cookies will be stored in your browser only with your consent. You also have the option to opt-out of these cookies. But opting out of some of these cookies may affect your browsing experience.
Necessary Always Enabled

Any cookies that may not be particularly necessary for the website to function and is used specifically to collect user personal data via analytics, ads, other embedded contents are termed as non-necessary cookies. It is mandatory to procure user consent prior to running these cookies on your website.