Last week, I had the opportunity to go through the Meyer May House in Grand Rapids, a home designed by America’s premier architect, Frank Lloyd Wright. And while touring the home is a great way to spend an afternoon, it’s also an experience from which we can draw hundreds of design and decor lessons and inspiration! I wrote in a previous post that one of the lessons I came away with was that it’s OK to buck the trends–OK, but not always easy (as someone pointed out in the comments). If you’d like to read that post, you can find it here.

A second lesson I came away with is this: Strive for Form AND Function! So often when we’re designing a new home, planning a remodel, or simply redecorating, we run into situations where we find ourselves believing that we have to select one or the other: form over function OR function over form. Occasionally we buy into the idea that this room or that architectural element in our home is either going to look good OR be functional. One or the other. Either we sacrifice looks for practicality, or we sacrifice function for beauty.

Frank Lloyd Wright refused to do that. Everything he designed took into account both design and function! He never compromised one for the other. It was always a marriage of the two. 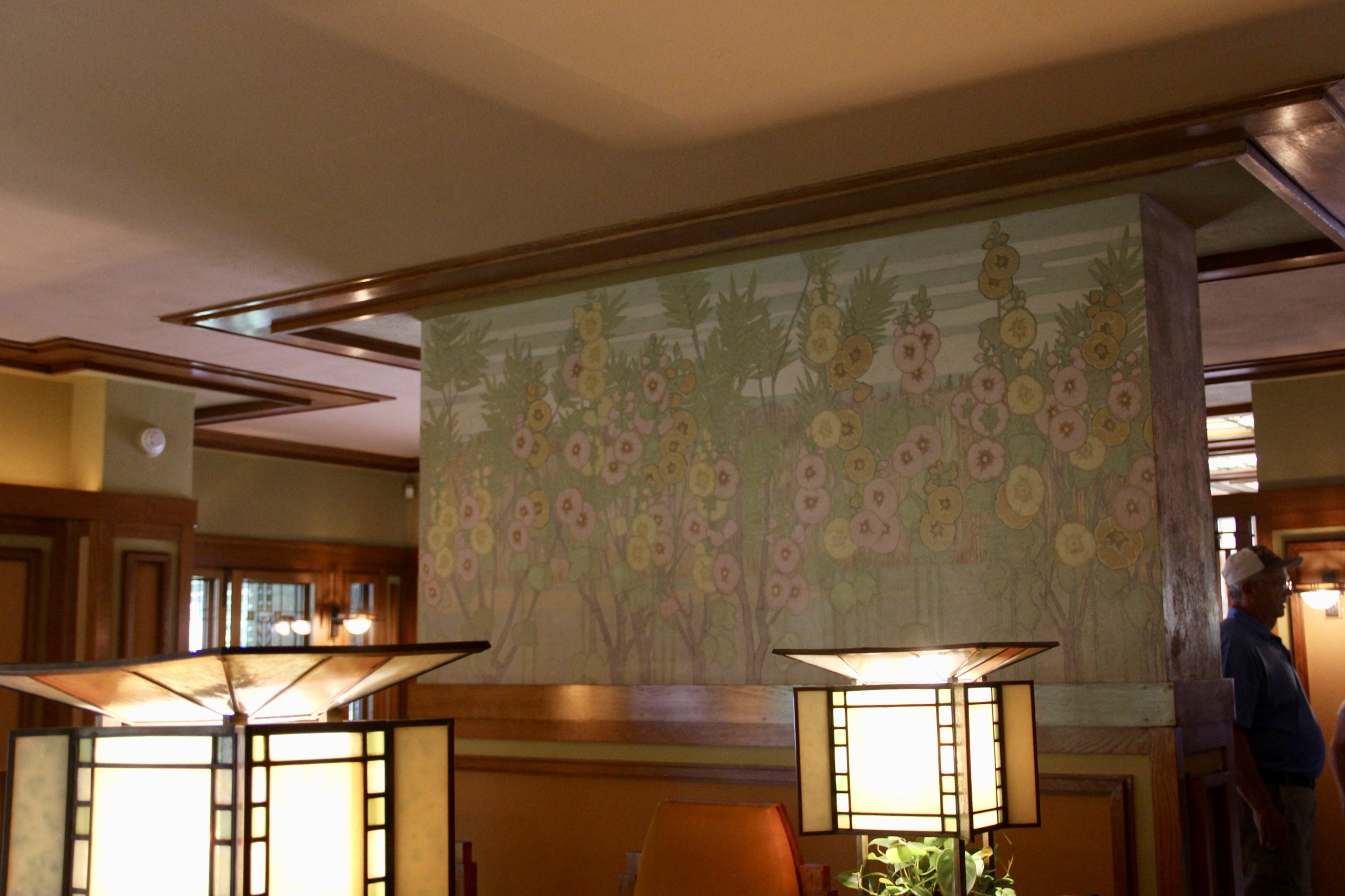 For example, in the picture above, you’ll see a load bearing wall between the dining room and the living room. It’s a necessary architectural element. And an unfortunate one at that: a wall that interrupts the open floor plan of the Meyer May House. However, rather than willingly sacrifice form for function, Wright has the wall painted with a beautiful mural that mirrors the flowers and natural beauty that pours in through the living room windows. The end result is an element that adds beauty and design to the home while at the same time performing its necessary function! A perfect marriage.

Also, the foundations of all the other houses in the neighborhood are standard cinder block foundations. Wright hated that look. A foundation is necessary, of course, but it that doesn’t mean it needs to be ugly or plain. And so the foundation of the Meyer May house actually accentuates the overall design of the house. It’s a functional element that actually adds to the design. Form and function once again.

And so in our homes we should never resign ourselves to having to live with certain architectural elements that are less appealing than we’d like simply because “we have to have them”. Get creative and find ways to bring beauty even to these areas. (And paint’s a great place to start!)

For example, I have an exposed steel rafter that runs across my living room ceiling. It’s an architectural element I don’t particularly enjoy! But, rather than leave it painted black and boring, I decided to get creative. I painted it with a metallic paint and then installed LED lighting across it. Suddenly the element that detracted from the look of my living room became something of a conversation starter, adding ambiance and even beauty.

So never willingly give up form for function. You can have both! And don’t forget that it works the other way as well. Don’t create beauty with limited (or no) function. 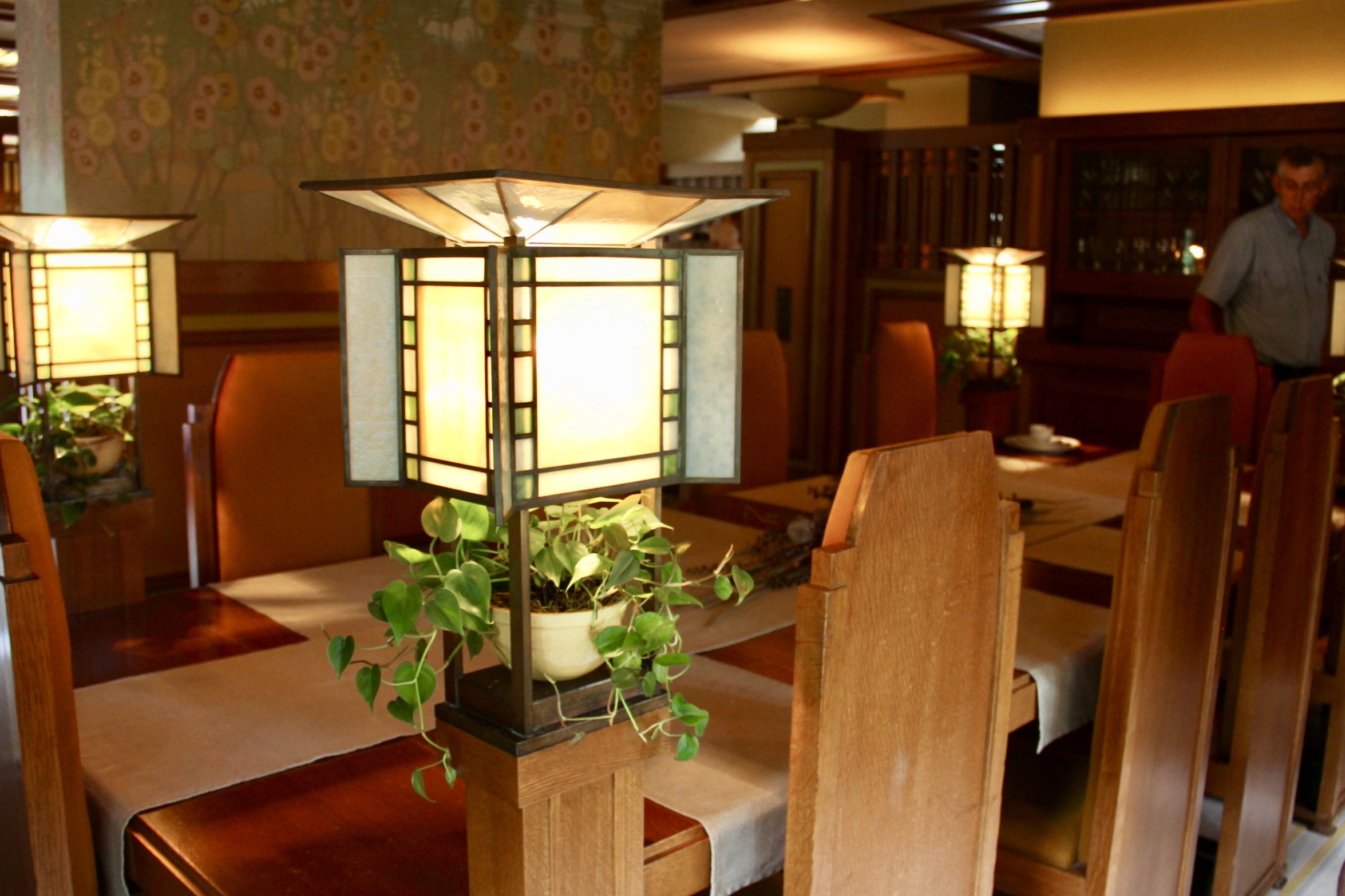 A great example of this is the dining room table in the Meyer May House. It’s a beautiful table that can be lengthened or shortened as necessary to accommodate the May’s guests. What makes the table somewhat unique are the pillars with electric lights that are affixed to the four corners. These pillars make up a integral aspect of the table’s overall beauty and design. However, they’re not just beautiful. They’re also incredibly functional.

Here’s why: in typical situations, electric lights set up in this manner would impose a serious limit on the function of the table due to the cords. Sure, the cords could be hidden in the columns, but what about when the table had to be lengthened or shortened for a dinner party? The columns are affixed to the table. At some point, the cords would be exposed, right? And that would severely limit both the beauty and the function of those attached lights.

Wright wasn’t willing to make the compromise, so he designed a table that somehow can be lengthened and shortened while still keeping the electrical cords powering the lights in the pillars from being exposed.

Creativity, brilliance, design, and planning can overcome many obstacles! Remember that in your decorating! Few of us are as brilliant as Frank Lloyd Wright, but we can still come up with solutions to keep our homes and our rooms beautiful and functional!