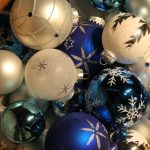 Yet another guest post from our Super-Hero Decorator Friend, the Purple Stiletto!

I’m dreaming of a white…and cheap….Christmas. The Purple Stiletto has been spending a good deal of time in the Craft Cave (with Christmas music blasting), trying to find the most inexpensive ways to decorate for Christmas. Now, being that this is the Purple Stiletto’s favorite time of year, it is important to have the feeling of Christmas in EVERY room. And that can get quite expensive! That is where common household items and a little bit of creative juice (and
eggnog!) come in handy.

Now, I will say, there had been ideas spinning in my head like ballerinas in tutus for quite a while. I started by gathering the items I already owned.

With a song in our hearts (or at least in my heart!), we arrived at the first thrift store. If we were lucky, it would be our ONLY thrift store stop. We entered the store with much anticipation and were met with the MOTHERLODE! There was Christmas stuff everywhere! We walked from table to table, looking at all of the different knick-knacks and do-dads. Red Ranger found a bag of fake snow for $1 and some reindeer antlers.

And then I spotted it……shiny and copper……the perfect little colander! And a steal at just $5. We paid for our treasures and returned to the Craft Cave.

I started by folding the hand towels so that only the bottom, decorative portion was showing. I had seen something on Pinterest (a favorite Purple Stiletto website for inspiration) that showed toilet paper with greens coming out of the tube. There is just something about putting toilet paper on display in the bathroom that just doesn’t settle well with me. So my solution was to use hand towels, folded, and then rolled into a tube. The Red Ranger cut sprigs of pine that I put in the top of the towel roll. My bathroom was ready for Christmas. How simple could it be?!

Next, I tackled my large wood bowl. Now, my intent was to fill the bowl with ornaments in varying shades of blue, white and silver. The colors were not a problem but the enormity of the bowl was! I had quite a few ornaments but not enough for such a large bowl. The Purple Stiletto does not let such pesky problems stand in the way! The solution was simple: place a layer of packing peanuts in the bottom and cover with a fabric napkin. I chose silver because it was more likely to blend in, should it be seen in the space between ornaments. Simple, inexpensive and literally minutes to put together. I was on a roll!

I did the same thing with my shiny new colander, except I added battery powered, LED micro lights. I picked them up at a home improvement store a while back for about $7. I put the end of the lights up through the holes in the bottom of the colander so the battery box was hidden under it. I added vintage Christmas ornaments that my grandma had given me and Voile! A fabulous kitchen decoration!

Last, Red Ranger and I tackled the mason jars and pitcher that holds beautiful flowers in the spring and summer. Red Ranger filled the mason jars with the fake snow and then cut tiny sprigs of pine. He also cut larger pine boughs to fill the pitcher. He added the tiny sprigs on top of the fake snow and I added tiny blue and silver ornaments for color. I added blue and green ornaments to the pines in the pitcher and a giant green bow. Our work for the day was done. Time to take a page from Santa’s book and have some milk and cookies!

That night, I sat with a good book by the fireplace and admired my new decorations. They were my everyday items that were suddenly filled with the magic of Christmas. The Purple Stiletto had done it again—turned something boring into something spectacular! The only thing missing is a festive drink! 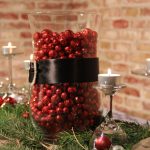 Another post from our Super-Hero Decorator guest writer, The Purple Stiletto!

Now, the most obvious basic item was the leftover branches from the bottom of my Christmas tree. They were going to add color and texture to the top of the mantel. I also collected together tea lights, small red and silver Christmas bulbs, unused wine glasses, an empty vase, ribbon, a rhinestone buckle and some sparkly red balls.

I started by laying the branches from my Christmas tree on the mantel. I let them drape over the edge just slightly. Next, I ﬁlled the vase with red balls, wrapped black ribbon around the middle and secured with a rhinestone buckle. I placed the vase in the center of the greens, then grabbed the wine glasses. I ﬁlled the glasses with red and silver Christmas bulbs and then turned upside down. I arranged the glasses among the branches on either side of the vase. I set tea lights on the bases of the wine glasses and stepped back to admire my handiwork. Fabulous! Now THAT was a mantel worthy of my new stocking!

OK, so I know most people would have stopped there, but I still had ideas that were begging to be used. The Purple Stiletto dreams in glitter and color all the time! So what to do with the remaining mantel idea…

I know! The Red Ranger needs a little holiday cheer! Yes, he has a tree (an artiﬁcial one with a pine scented car freshener to make it “smell real”) and lights and some Christmas tidbits here and there but he could really use an amazing mantel too!

I loaded some supplies in my car and dashed through the thickening snow. Under the cover of night, while Red Ranger slept with visions of sugar plums and glitter dancing in his head, I snuck in and worked my magic on his exceptionally dull ﬁreplace.

I, again, began with branches from my Christmas tree. I put a beautiful pillar tree candle in the middle of the branches and began working my way along the mantel. I added large wine glasses with pale blue and silver ornaments, ﬂipped them over on either side of the center candle and added tea lights to the base of the glasses. I followed this with medium, white pillar candles along the length of the mantel, alternated with small glass votives. I scattered the remaining blue and silver ornaments among the greens and candles for a little sparkle. I lit the candles and the effect was breathtaking! It was beautiful! Now, the Red Ranger’s house was dressed for the holidays.

I snuck out, grinning to myself and wondering what the Red Ranger was going to think when he woke up…

As the Purple Stiletto settled into her armchair next to the ﬁre with a glass of wine (in a Christmas glass, of course!), she reﬂected on how amazing it was that such simple objects could completely transform a mantel. The same items could also be used down the center of a table or buffet, but that was for another day. It was time for the Purple Stiletto to kick off her shoes, put her feet up and relax as the scents and scenes of the season washed over her. How was she ever going to make it better next year…