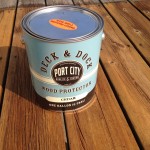 When it comes to protecting your deck, there are a lot of options out there as well as a lot of misconceptions. And really, much of this is brought on by slick marketing campaigns.
One commercial springs to mind. It shows a guy in house on a huge cliff overlooking the ocean. He wakes up in the morning, crams his iPod headphones into his ears and jogs down his immense wood stairway leading down from his immense deck. I think he’s going to get the paper or something. Anyway, the point is that he’s oblivious to everything going on around him and he doesn’t realize that an enormous wave of epic proportions is preparing to crash down on his house.
Well, he does his thing, gets the mail or the newspaper or whatever he was after, and while he’s gone for those few seconds, the wave hits. The deck is pounded with water, the stairs are buried beneath the tidal wave. But then, as quickly as it hit, it’s gone. And the guy returns with his paper, walking back up (or down–I can’t remember) the same pristine stairs and across the same flawless deck he had traveled earlier. He only stops and realizes something might be up when he sees that in the fishbowl . . . rather than his little gold fish that had been there earlier . . . is now a piranha.
The point of the commercial is to show you the durability and strength of a particular deck coating. And that sounds great. And it looks great. It’s a very effective ad–we see the water beading up on the deck and we’re convinced. If we just buy that coating, we’ll be fine . . . our deck will last forever, right?”
Unfortunately, wrong. That’s where the misconception comes in. Deck coatings, no matter what you use, are likely going to give you 1-2 years of protection on your deck. That’s the dirty little industry secret that nobody wants to share. You’ll hear how this product outperforms that one. You’ll hear that product X will give you 2 times the industry standard in protection and durability. You’ll see commercials about tidal waves burying small houses. But you’ll rarely hear someone say, “you’ll probably need to do this all again in a year or two.”
And yet that’s the truth of it. Deck coatings are subjected–especially here in Michigan–to some tremendous wear and tear. They have to hold up to hot Michigan summer sun, torrential Michigan Spring and Fall rains, as well as everybody’s favorite . . . Michigan winters. That kind of abuse will wear a coating down quickly. And as a result, you’re most likely going to need to re-apply your wood protector every other year or so.
OK . . . so why explain that? Why let the “dirty little industry secret” slip out? Do I have a product that I’m going to claim is going to last twice as long? Do I have one of those classic tag lines used by slick advertisers everywhere? Something along the lines of . . . “yes, that’s what USED to be the case, but now, with this new product from RepcoLite, you won’t EVER have to coat your deck again!” Do I have something like that to say?

Nope. RepcoLite’s Port City Deck and Dock Wood Protector is going to give you the same durability you’re going to get from any of the other national high quality deck products out there. (Though it truly is WAY better than another, well-known deck protector that I won’t name here [insert cough that sounds like “Thompson’s”]).

No, I don’t have a super-amazing product that will blow the doors off the competition . . . . That’s not my point for explaining the limitations of all deck coatings. My reason for doing so is in the nature of honesty. So many customers we help in the stores have misconceptions as to what to expect when they coat their decks. And, as I said earlier, these misconceptions are promulgated by companies who sell deck coatings. They’re afraid that if they tell you the truth, nobody will buy the products. They’re afraid that if they confess that the product will probably last a year or two before requiring some maintenance, you won’t bother coating your deck.
At RepcoLite, we look at it from another perspective. We feel it’s worse to lead you into a sale by not making you aware of the full story. We’re not afraid that you’ll skip cleaning and coating your deck when you hear the nature of deck coatings. We’re pretty confident you’ll still go ahead with the projects. But we want you to know the full scoop–we want you to know what to expect: from our coatings AND from our competitors.
The truth isn’t something to shrink away from. It’s not something to hide. Giving a customer the full story and all the information ahead of time–before their purchase–is a much better business model. At least in our minds.
So when you get ready to coat your deck, we’d love to help you and we’d love to sell you the very best coatings at the very best prices. But what we don’t want to do is mislead you. Remember: any deck coating you buy–anywhere, from anybody–is probably going to give you 1-2 (maximum of 3) years before it needs maintenance. Keep that in mind, plan for that . . . and you won’t be disappointed!